Cases of the flu are surging through in Victorian schools, with children making up almost half the total reported number of flu cases so far this month*.

The Health Department has warned senior Victorian education staff that flu cases have more than doubled each week for the past three weeks, and that children and teenagers are the worst affected.

According to The Age, the alert has prompted some schools to consider encouraging students to return to mask-wearing, although Education Minister James Merlino said there is no plan to bring back a mask mandate.

At the same time, Covid-19 infections also refuse to let up. Victorian Department of Health’s report dated 19th May 2022 states that there have been another 14 COVID-19 deaths. There are 512 cases in the hospital, with 32 of those in intensive care and seven requiring ventilation. There were 13,201 new cases on 19th May alone. Overall, there are 76,846 active cases of Covid-19. 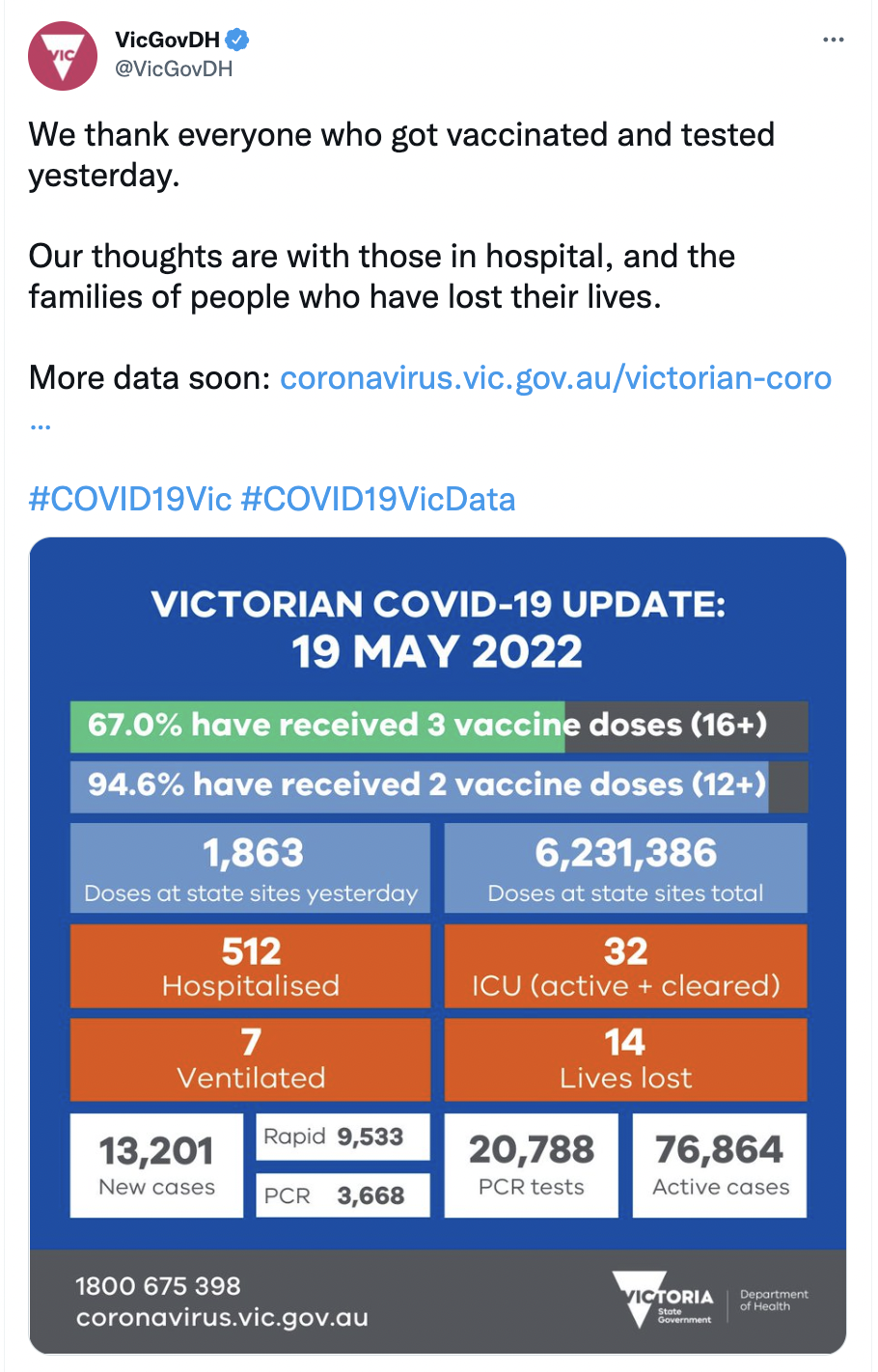 The president of the Victorian branch of the Australian Medical Association, Dr Roderick McRae, said the state’s coming flu season would probably be worse than the previous two years, given restrictions had eased and there had been a lack of exposure to the virus.

“It’s everywhere and it’s being spread by going to birthday parties, by going to the footy, by going to a show, and we’re being encouraged to do exactly that,” he said.

McRae said a further surge in Covid cases, combined with a bad flu season, could put incredible pressure on the state’s hospitals, which are already suffering from overcrowding and ambulance ramping at emergency departments.

“The public hospital system is in crisis right now,” he said.

“Staff don’t like it, they’re putting in unpaid overtime, they’re unhappy and they’re sad that they can’t do the job to the best of their ability. Yet we continuing to add more pressure to the front end of the system by more people contracting Covid-19 or influenza.”

A case for the mask mandate

The Australian Medical Association (AMA) in Victoria is recommending a return to mask use in settings where there is a high risk of transmission, such as large sporting events, movie theatres, concert halls, restaurants and public transport.

“It’s just about being sensible,” McRae said. “AMA Victoria is not calling for a mandate, that’s the government’s call, but the entire community should be thinking about whether it wants to completely block the public hospital system and its ability to support everybody.”

In Victoria, masks are currently required on public transport, in taxis and rideshares, at airports and in health, aged care and justice settings.

The government strongly recommends people wear masks in places where they cannot physically distance, are in contact with vulnerable people or if they have Covid-19 symptoms.

Will the mask mandate return? It remains to be seen.

Omicron subvariants of COVID-19 that may be able to evade vaccine immunity are on the rise in Victoria. Health authorities have issued a warning that just like NSW and Queensland they’re on...

END_OF_DOCUMENT_TOKEN_TO_BE_REPLACED

Current boosters are the same formulations as the first authorised doses which were formulated based on the original strain of the coronavirus. It’s important to note that these formulations still offer protection...

END_OF_DOCUMENT_TOKEN_TO_BE_REPLACED

Amid concerns over waning immunity against COVID-19, healthcare workers in hospitals across Victoria are waiting to become eligible for a fourth dose (or 2nd booster). Premier Daniel Andrews revealed his intention to...

END_OF_DOCUMENT_TOKEN_TO_BE_REPLACED

With flu season underway in Australia and an increasing number of cases already confirmed, people are are already being urged to receive their influenza shot as early as possible. The Victorian government...

END_OF_DOCUMENT_TOKEN_TO_BE_REPLACED

What is Paxlovid?  Paxlovid is Pfizer's antiviral treatment for COVID-19. It’s one of the new oral antivirals formulated to limit the impact of COVID-19 available on the Pharmaceutical Benefit...

END_OF_DOCUMENT_TOKEN_TO_BE_REPLACED

Vaccinations – Do they have an impact on long COVID?

As we enter the third year of the pandemic, long COVID has become an increasingly important concern.  Long COVID is characterised by COVID-19 symptoms that last longer than three...

END_OF_DOCUMENT_TOKEN_TO_BE_REPLACED

What happened to the impending COVID-19 & Influenza ‘twindemic’?

Why haven’t waves of COVID-19 and influenza infections spread over countries simultaneously? A piece by The New York Times recently explored potential answers to this intriguing question. They reported that the “viral...

END_OF_DOCUMENT_TOKEN_TO_BE_REPLACED

Health authorities have detected 637 cases of a new COVID variant in England. Dubbed the XE, relatively little is known about it. The variant is a combination of the...

END_OF_DOCUMENT_TOKEN_TO_BE_REPLACED

As Australians collectively emerge from nearly two years of isolation, immunity against flu and cold is being called into question as there may be yet another threat to consider.

END_OF_DOCUMENT_TOKEN_TO_BE_REPLACED

Scientists have confirmed the existence of a new COVID-19 variant that combines mutations from both omicron and delta variants for the first time, and there are reported cases in both Europe and...

END_OF_DOCUMENT_TOKEN_TO_BE_REPLACED

The first major study to compare brain scans of people before and after catching COVID-19 has revealed loss of gray matter and tissue damage, mostly in areas related to smell.

END_OF_DOCUMENT_TOKEN_TO_BE_REPLACED

The new COVID-19 antiviral drugs – Where art thou?

In January, the TGA provisionally approved two oral dose treatments for the COVID-19 virus to be used in the first phase of the illness.   Both oral antivirals are designed...

END_OF_DOCUMENT_TOKEN_TO_BE_REPLACED

Our staff members are being extra vigilant during this time to ensure a safe and clean working environment to safeguard the health of our staff and customers.

To deliver this service safely to our customers we have implemented the following measures:

•If you have any cold & flu, or COVID symptoms, please do not attend your appointment. Please cancel and rebook for another time when you are well.
•Hand sanitiser will be available for use by the doctor between each vaccination and is available for customer use prior to the vaccination.
•Your temperature will be taken using a no‐touch thermometer prior to vaccination to ensure that you do not have a fever.
•Please wait outside the pharmacy till a pharmacy assistant guides you to the vaccination administering area
•All hard surfaces in the vaccination room are cleaned regularly.
•Staff and customers will be required to socially distance by 1.5 meters at all times.

Heathershaw’s Compounding Pharmacy collects your personal and sensitive information (including name, phone number, email address, Medicare number) when you book your health consultation, for the purposes of ensuring your suitability for vaccination, administering the booking and unless otherwise advised by you, sending you electronic messages (e.g. emails or SMS reminders) or telephoning you. It is a condition of booking a health consultation with us, that we collect your personal information, and where reasonably required, your sensitive information. We will disclose this information to the doctor who completes your vaccination, and others in accordance with privacy legislation. Our privacy policy can be found here (link).